On the last weekend of August, friends, family and fans of singer/songwriter Dan Fogelberg gathered for a series of events to honor the Peoria native. Admirers came to Peoria from all over the country to pay tribute to the life and music of a man who touched so many hearts. The weekend kicked off with a “DanFan party” at the Hotel Père Marquette on August 27th. The next day, a memorial was unveiled at a dedication ceremony on the Peoria Riverfront, followed by a tribute concert and after-party at the Scottish Rite Cathedral.

Jean Fogelberg is the wife of the late Dan Fogelberg, and the creator of DontLoseHeart.org, a website/blog for caregivers. She is also an active advocate for the Prostate Cancer Foundation.

What a magical weekend! It felt more like a family reunion than a memorial. On Friday night, we took over the Hotel Père Marquette’s ballroom and celebrated Dan’s life and music and met new friends. There wasn’t time for all of the musicians who wanted to be in Saturday’s tribute concert to play, so we thought, “Let’s have a little party the night before where those musicians can play, and it will give everyone coming from out of town another event to go to.” Dan and I had always stayed at the Père Marquette, so that seemed like a logical choice. When the catering manager asked how many people we thought we’d have, we said, “Oh, a hundred, maybe as many as two hundred…” Night of the Three Suzies
But the RSVPs continued to come in, and after 250, I was starting to worry—I’d never planned such a big party before. Enter Suzy Drell, a professional event planner and friend who had known Dan since their college days. She said, “Well, let me know if you need any help.” When the RSVPs reached 350, I called her and said, “Help!”

We kept calling the hotel and adding more food, and once the RSVPs passed 400, they moved us into the ballroom. The staff was so helpful—the banner in the lobby welcoming “DanFans” was their idea. One day, while Suzy and I were discussing the menu, she asked, “Can you think of anything else you want?” I replied, “I’d like a suite named after Dan,” and laughed. But Suzy is a “moxie girl”—she asked the hotel manager, who immediately agreed it was an excellent idea. I understand they already have reservations for The Dan Fogelberg Suite.

My friends, Susie Chinn and Suzie Fernandez, also long-time friends of Dan’s, agreed to be our official photographers and not only took a lot of photos with their own cameras, but also graciously helped partygoers get shots of themselves with their point-and-shoot cameras.

The Welcome Party
The mood was one of excitement: after months of anticipation and planning, it was all actually happening. We dressed in our finery, and the women all looked beautiful and the men all handsome. I remember thinking, “What a fine-looking group!”

People who cried when they’d heard the news of Dan’s passing and tried to explain their tears to friends and family were now among 450 others who had felt that same sense of loss. There was a sense of belonging and of familiarity. I wondered how many people in that room had stood together in a theatre, arena or amphitheater in the ’70s, ’80s or ’90s without meeting?

We met. We mingled, talked, ate, reminisced and ended up on the dance floor, swaying with our arms intertwined, singing at the top of our lungs. Everyone knew the words. On stage was a revolving group of talented musicians who weren’t there to sell their latest CD or further their careers. They were there to play the songs that had shaped them as musicians and as people, and to pay homage to the man who had given them those songs. Jon Asher, Terry Walters and Robyn Sleeth, of Dan’s high school band The Coachmen, reunited after 42 years to honor Dan. 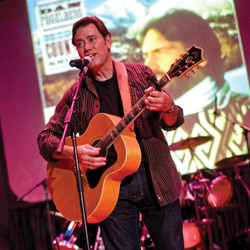 Historical Markers
Saturday afternoon was hot, but not as hot as the day before or the day after. The thunderstorms that were expected later in the week held their course, so the weather on the day of the memorial dedication was all we could have hoped for. The trolley tours that took guests to a series of Dan-related sites were sold out, so people carpooled and followed the trolleys from location to location.

Eric Mills, the tour guide, said that each time the trolley stopped, three or four cars pulled up alongside and rolled their windows down to hear his descriptions. When he was finished, up went the windows, on went the air conditioners, and off went the caravan to the next location: Woodruff High School, Fogelberg Parkway…I laughed when I heard that, and it’s still one of my favorite images from the weekend.

The staff at the convenience store on Prospect Road that Dan immortalized in song hadn’t known who he was a few weeks before. Now, “Same Old Lang Syne” played on a loop all day. A few couples bought six packs, and quite possibly, drank them in their cars.

Riverfront Monuments
The memorial ceremony had a somber, reverential mood. We gathered to unveil event organizer Hugh Higgins’ masterpieces: three large boulders etched with lyrics from “Part of the Plan,” “Icarus Ascending” and “River of Souls.”

The boulders are surrounded by plants and a perfectly-shaped Colorado Blue Spruce. Hugh had kept a small part of his plan a secret: three small boulders set alongside the riverwalk path leading to the memorial site had the lyrics to “Ever On” etched into them. How he managed to get all of that approved by the various city entities while also organizing a tribute concert is still a mystery to me.

Peoria Mayor Jim Ardis gave a speech, and introduced Peoria Park District Trustee Roger Allen, who added to the opening comments. I had thought Dan’s mother, Margaret, was going to be the one to speak for the family, so I was surprised when they asked me to say something too, and I dragged Margaret along with me for moral support. I thanked everyone for the donations that helped to pay for the memorial, and then Margaret gave a lovely speech that had many misty-eyed.

After the unveiling, Hugh Higgins shared some remarks about the lyric choices on the stones. Deb Jelinek, who is the founder and director of Dan’s endorsed fan website, thelivinglegacy.net, as well as an ordained minister, gave a heartfelt blessing, then Peoria musician Barry Cloyd played guitar and sang “Ever On” as a sailboat sailed by on the river and dragonflies, butterflies and birds swooped and soared. When the ceremony was over, we all milled about, talking, taking pictures and placing flowers. A River of Souls
Many people said to me, “This whole weekend has to be so difficult for you,” but honestly, I knew going in that I was going to be the least sad person there. I was with Dan when he died. I had that sure knowledge that he had passed into that river of souls, and had had over two and a half years to process that loss. I knew that for many, the memorial dedication was going to hold some finality—they were going to realize, “He’s really gone,” and experience their own grief. The overwhelming emotion for me during the whole weekend was gratitude. During the dedication, I experienced the same emotions I feel every time I hear Dan played on the radio: happiness and peace that his legacy lives on. My heart was full, but not heavy.

The Tribute Concert
The concert was held at the Scottish Rite Cathedral, and as I walked up the steps to the front doors, I realized that I didn’t have a ticket! I told the woman at the door that I was Dan’s wife, and thank goodness, she let me through. Inside, the mood had shifted again—it felt to me like people had said their goodbyes to Dan and were now feeling lighter.

The cathedral has no air conditioning, and with all of those people in there, it was pretty hot, so we remained seated and saved our energy for singing and applauding. The stage was beautifully lit, and there were photos of Dan and his albums projected on a screen behind the musicians. The lineup changed with each song: in addition to guitars, keyboards and drums, some songs had, say, a string quartet or slide guitar. It was obvious they had rehearsed extensively, and everyone moved gracefully from song to song.

To the Depths of My Soul
I had no idea what songs were going to be played, and I was completely surprised when, as “The Reach” began, I burst into tears. It’s not just that Maine is home now, I think it’s also that when I remember all of the nights of standing backstage and listening to Dan perform, “The Reach” is the song that comes to my mind first. Deb, who was sitting on my left, put her arm around me, and I could hear her sweet voice singing the harmonies. By the end of the song, I had pulled it together.

More than $15,000 was raised for the memorial, from donations that came from as far away as the Netherlands. This allowed organizers to chronicle its creation through the time-lapse photography of Peoria’s Raphael Rodolfi of Videogenique. The video is available online for those who wished to attend, but could not make the journey. Visit dfpeoria.com for Peoria-related Fogelberg events, as well as thelivinglegacy.net and the official website, danfogelberg.com.

Then they played the recording of Dan singing “Leader of the Band,” while photos of Dan’s father, Larry, were projected on the screen, and Deb lost it. She cried through the whole song. Soon, there was an intermission, and then the concert resumed. When they started to play “There’s a Place in the World for a Gambler,” my friend Laurie Williams, assistant director of thelivinglegacy.net, who was sitting on my right, started crying. I wondered: How many people that night were surprised by the emotions released by a particular song?

The concert ended with a well-deserved standing ovation, and those with tickets went downstairs to the post-concert party, where Hugh was presented with a plaque honoring his amazing efforts in making the whole thing a reality, while we looked on and applauded.

Ever On
A group of us walked back to the hotel, and we were sooo hungry! But the bar was closing, so we ordered some pizza and moved into a meeting room at the front of the hotel, where a few people had arranged some chairs in a circle and were talking about the events of the weekend and Dan’s music. More people arrived, and then the pizza, and then still more people arrived with guitars in hand. A spontaneous Dan song sing-along began, and the circle expanded.

It was obvious that no one wanted the weekend to end, but I was meeting Dan’s family for breakfast the next…um…that morning, so at 3:30am I said, “Good night.” I understand they sang until 4am, when the musicians played “Gambler” to signal the concert was at an end! (That’s right, folks, Peoria parties until 4am!) a&s

My heartfelt thanks to everyone who helped to make the entire
weekend such a success, and to Hugh Higgins, whose imagination
and determination made it all possible.