125 Years Of Growth And Achievement
by Amy Geier Edgar |

As Bradley University celebrates 125 years of operation, it continues to have a positive impact on the city and region with which it has become virtually synonymous.

Bradley’s origins stem from the dreams of lydia Moss bradley after experiencing loss.

Bradley’s origins stem from the dreams and determination of Lydia Moss Bradley. After the deaths of their six children, Bradley and her husband Tobias considered establishing an orphanage in their memory. Those plans ended when Tobias died in May of 1867, leaving Bradley alone to determine what kind of legacy she could create for her beloved family.

After careful study and research, Bradley began to focus on a new goal: the creation of a school to help young people prepare for life. Bradley Polytechnic Institute was chartered on Nov. 13, 1896. To get it off the ground, she gifted 17.5 acres of land to the institute, plus the funds necessary to construct two campus buildings, buy laboratory equipment and library books, and provide for annual operating expenses.

By 1899, there were 350 students in the School of Arts and Science at Bradley studying subjects such as biology, chemistry, food work, sewing, English, German, French, Latin, Greek, history, manual arts, drawing, mathematics and physics. Bradley later donated the rest of her estate to the school, including nearly 1,000 different pieces of property. In 1906 she announced an additional gift to build Hewitt Gymnasium, now Hartmann Center for the Performing Arts.

Following Bradley’s death in 1908 at the age of 91, the school continued to grow, transitioning into a four-year college offering bachelor’s degrees in 1920 and a full university offering graduate programs in 1946, when it was renamed Bradley University. In addition, the university offers unique academic services such as the Turner Center for Entrepreneurship and the Smith Career Center, which assists with résumés, cover letters and interviews. Something must be working, as BU brags a  93% placement rate – at a job or graduate school – within six months of graduation. BU also has been a leader in game design and development, offering top-ranked undergraduate and master’s programs in that discipline. The Center for Cybersecurity provides cutting-edge education, collaborates with local companies, and facilitates research in this growing high-tech field. Meanwhile, Bradley’s Charley Steiner School of Sports Communications was the first named sports communications school in the country. 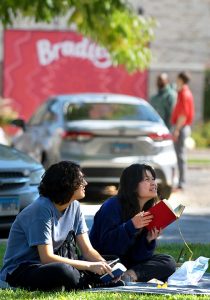 Bradley university frequently ranks among the top schools
in the midwest.

Opportunities abound for students outside the classroom, as well, both in athletics and academics. Students can participate in Greek life, among approximately 250 other campus organizations. The Bradley University speech team has won more than 40 national championships, making it the most successful speech team in the nation. Meanwhile, 15 Bradley Braves varsity sports teams participate in the NCAA Division I Missouri Valley Conference. The men’s basketball team has played in the NCAA Championships nine times, advancing twice to the Sweet Sixteen. The Braves baseball team made it to the College World Series twice. The university’s sales team also is wildly successful, having defeated 66 other colleges this year and becoming the first back-to-back national champion of the National Collegiate Sales Competition.

BU frequently ranks among the top schools in the Midwest, according to major publications such as the Princeton Review and Wall Street Journal. In the 2022-2023 rankings by U.S. News & World Report, Bradley came in at 166 out of 443 national universities. The Bradley speech team has won more than 40 national championships.

Bradley University President Stephen Standifird leads an academic staff of more than 340 full-time faculty members, while overseeing an endowment of some $310 million. Standifird became the university’s 12th president in 2020, following the retirement of Gary R. Roberts. Joanne K. Glasser served as Bradley’s 10th president and the first woman to hold the position. Its first president – then known as a director – was Edward O. Sisson, who oversaw the school from 1897-1904. The school’s longest serving president was Dr. Martin Abegg at 22 years (1970-92). Over the years, the university has been guided by other leaders who navigated the Depression, world wars, campus unrest, and financial difficulties.

The footprint of the campus has expanded and its facilities have grown to include the Caterpillar Global Communications Center, the Renaissance Coliseum, the Hayden-Clark Alumni Center, and the Business and Engineering Convergence Center (BECC).

legacy by focusing on the needs and interests of today’s students. Students should choose us because we’ll help them build the futures they want and meet the challenges of tomorrow.”

Numerous events are planned over the course of the 2022-23 school year to celebrate this milestone anniversary. The public was invited to participate in the Founder’s Day Convocation in September. Homecoming and Late Night Bradley are incorporating the 125th anniversary theme into their programs, said Linda Aylward, special collections assistant at the Virginius H. Chase Special Collections Center.

Work began there this past summer to develop a digital exhibit, “125 Years of Bradley History in Objects,” which offers a snapshot of the university’s history through news clippings, photos, artifacts and documents.

Special Collections Director Libby Tronnes, Ph.D., emphasized that the pieces selected do not necessarily represent the most important moments of the university’s history, nor do they tell a complete story of the people, places and events that make up the fabric of Bradley. However, they do highlight the social, political and economic changes experienced across campus and the nation during the past century.

Items range from a sample of a 1902 Domestic Science book that highlights the gender expectations of women at the time to a pride flag raised in 2021 honoring National Coming Out Week and celebrating LGBTQIA+ History Month. There is a program from the first Founder’s Day in 1898, as well as a link to the BU COVID-19 Oral History Project and Archive.

Special Collections Center officials want to add to the digital exhibit, and they are encouraging donors to contribute physical items, images and stories. Learn more about that at our webpage 125 Years of Bradley History in Objects.

For information on Bradley University’s founder Lydia Moss Bradley check out WTVP’s original historical documentary, Lydia: Ahead of Her Time. is the Youth Services librarian at the Dunlap Public Library District, following a career in journalism that included working for the Associated Press in Ohio, Connecticut and South Carolina, where she covered the Statehouse. She lives in Peoria with her husband, Rik, and two daughters.